This year for the 10iss in Oaxaca, Mexico, the International Shibori Symposium is partnering with our friends at Bushika Adventures to offer a unique opportunity to learn and create side by side with members of the Boruca people in Costa Rica. Co-founder Pica Lockwood has kindly shared some details about the community and their rich craft traditions, as well as pictures she and her husband and co-founder Anibal Maroto Rojas took on their recent visit to Costa Rica in July. We hope you enjoy this glimpse into a fascinating community and culture. You can read more about the 10iss tour to Boruca, led by Anibal, on the 10iss website.

The Boruca, also known as Brunkas, are an indigenous people of Costa Rica with a long history and a rich craft heritage. Originating from the Chibcha tribe of Colombia, the ancestors of modern Boruca composed a group of chiefdoms that ruled most of Costa Rica’s Pacific coast from Quepos to the Panamanian border. Today they are one of the few indigenous communities remaining in Costa Rica. The Boruca community of about 3,000 people resides in a village nestled in a small valley on a reservation about 20km south of Buenos Aires.

Traditionally subsistence farmers producing small-scale crops of rice, beans, and corn, since the mid 1990s the Borucan economy has dramatically shifted to favor the sale of indigenous crafts.

Borucans weave on pre-Columbian backstrap looms, creating fabric for an array of items such as bags and wall hangings. They spin yarn with handmade drop spindles from natural white and brown cotton grown on the reservation, and dye with natural dyes from a variety of local plants such as sacatinta, turmeric rhizomes, teak, and achiote. 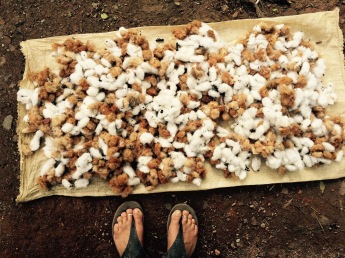 The Boruca are also one of the few remaining communities in the world who dye with the murex mollusk. Valued throughout history for its rare color which only deepens with age and exposure, murex purple – called Tyrian purple in Mediterranean antiquity – comes from various members of a family of sea snails (Muricidae) which secrete a mucus containing a purple-colored bromine compound.

Murex purple has historically been a mark of privilege and social rank due to its enormous expense and rarity. The sheer number of snails required to dye a length of fabric in addition to the enormous effort required to gather them results in an extremely expensive dyestuff. In addition, the modern family of murex mollusks across the world has drastically declined in population due to collateral damage from commercial fishing, destruction of habitat in part due to chemical and oil spills, and the rise of sea temperatures.

Although many historical practices destroyed the murex mollusks upon harvest, the Costa Rican murex mollusk has its dye gland close to the shell opening, enabling Borucan dyers to “milk” their snails to harvest the dye before returning them to the rocks where they make their homes.

In addition to their textile crafts, Borucans create elaborate masks carved from balsa or cedar wood, which may then be painted and decorated with feathers, moss and leaves, horsehair, and other adornments.

Borucan masks are traditionally used in the three day-long new year’s festival called “Juego de los Diablos” (Game of the Devils) or “Baile de los Diablitos” (Dance of the Devils), wherein a cast of brightly costumed characters illustrate the struggle between the indigenous people and the conquistadors during the Spanish conquest. 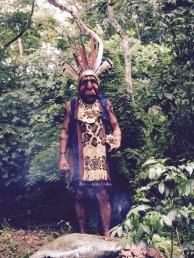 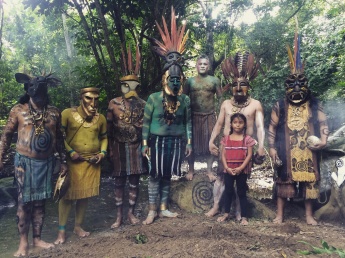 Anibal, Pica, and their daughter Kanani

The Bushika Adventures tour company was founded by husband and wife team Anibal Maroto Rojas and Pica Lockwood. Anibal is Borucan, whereas Pica was assigned there as a forestry volunteer for the Peace Corps in 1991. Pica and Anibal now split their time between the San Francisco Bay Area and Boruca.

Their tour company takes its name from the indigenous word “bushika,” meaning “fortuitous,” and ascribes to a philosophy of learning through exploration and immersion, embodying the indigenous belief that the most meaningful experiences happen by positive chance.

The 10iss tour to Boruca will run from November 21st – 28th (8 days, 7 nights), starting and ending in San Jose, Costa Rica. Participants will visit various locations on the Boruca reservation, stay with Borucan host families, participate in dyeing, weaving, and mask making workshops, and journey to the coast to experience murex dyeing.

You can read more about the tour, personally led by Anibal, on the 10iss website.

All images courtesy of Pica Lockwood.

This entry was posted on 27 July 2016 by World Shibori Network.