Join us for a talk by textile scholar, researcher, and Chinese boro collector, Gao Yu, also former intern to Yoshiko Wada at Slow Fiber Studios. He translated to Chinese, the book, The Roots of Asian Weaving: The He Haiyan collection of textiles and looms from Southwest China Hardcover – November 30, 2015

Gao Yu’s story takes us to Guizhou, China. He will share the story of how Chinese boro textiles were discovered and collected there, now exhibited at the fashion designer, He Haiyan’s gallery in Beijing. Learn how Haiyan, now connects and partners with Miao women in Guizhou to translate their stitching, weaving, recycling and sustainability into 21st century lifestyle products. It’s preservation and reimagining of traditional stitchery at work. 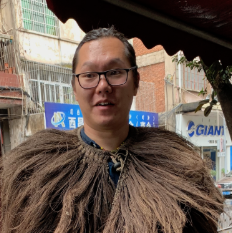 Gao Yu is a Beijing-based researcher and translator, specializing in ethnic textiles. Curiosity drove him to travel throughout Asia and experience unique hand weaving and natural dye techniques firsthand. He is the Chinese language  translator of The Roots of Asian Weaving: He Haiyan Textile and Loom Collection of Southwest China by Eric Boudot and Chris Buckley, as well as of educational articles related to ethnic weaving. Gao Yu is a worldwide traveler and international intern at Slow Fiber Studios and the World Shibori Network.  He has studied and worked closely with SFS founder Yoshiko I. Wada in China, India, and Japan. He will share his passion for ethnic textiles from his native country and his experience of and knowledge about Southeast Asian and Chinese textiles.